BRUEGEL: THE SEASONS AND THE WORLD

In 1565, Pieter Bruegel the Elder was commissioned to create a series of paintings for a dining room in Antwerp. The images, charting the course of a year, changed the way we view the world through art. Landscape had previously been a decorative backdrop to dramas, both sacred and profane. But in Bruegel's hands the landscape and our interaction with it became the focus. Looking at paintings such as ‘The Return of the Herd’, ‘The Hunters in the Snow’ and ‘The Gloomy Day’, this lecture explores how Bruegel pioneered a whole new way of thinking about the environment and our individual places within a shifting cosmos.

Gavin Plumley is a writer and broadcaster, appearing on BBC Radio 3, BBC Radio 4 and contributing to newspapers, magazines and opera and concert programmes worldwide. Gavin lectures widely about the culture of Central Europe during the 19th & 20th centuries. His recent talks have been held at the Royal Opera House, National Gallery, National Trust, National Theatre, British Museum, V&A, Southbank Centre, Tate and Neue Galerie, New York. His first book ‘A Home for All Seasons’ was published in June 2022. 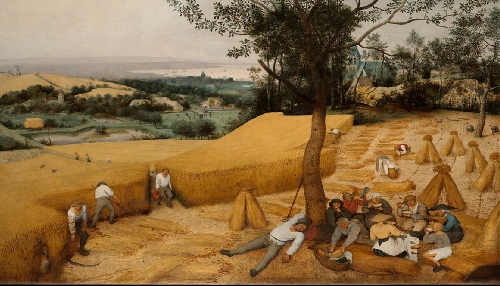