Son of Heaven, Man of the World

Qianlong was one of the greatest of Chinese Emperors, guiding China through a period of political, economic and cultural prosperity.Territorially, Qianlong added landmass to the Empire through successful military campaigns and astute diplomacy. He was passionate about preserving his Manchu culture, whilst respecting and nurturing other ethnic Chinese cultures. The Emperor travelled his Empire regularly, undertaking lavish expeditions, designed to forge loyalty to his Imperial rule. Qianlong was a noted scholar who wrote and published over 43,000 poems, painted on virtually a daily basis and was accomplished in the art of calligraphy. It was as a patron, collector and curator of Fine Art & Antiques that Qianlong created his greatest legacy and amassed a vast treasure trove of works of art from previous dynasties.

David Rosier is a Chartered Insurer, and Fellow of the Assurance Medical Society. He spent over 25 years focusing on business in Asia and lived in Hong Kong, where he and wife Wendy, created a ‘World Class’ collection of Imperial Qing Dynasty items, which was acquired in 2019 by The Shanghai Museum. David lectures extensively on Chinese Court Costume of the Qing Dynasty (1644-1911), plus the history, culture, and arts of Imperial China, around the UK, Europe, Australia, New Zealand, and SE Asia, as well as organising and leading tours to China. 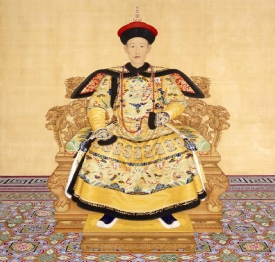